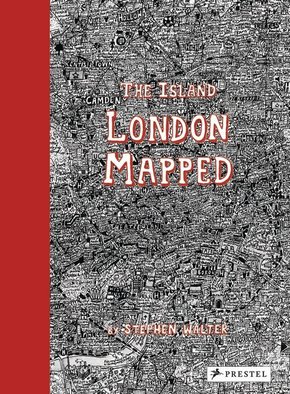 A masterpiece of imaginative cartography, artist Stephen Walter's detailed maps of London reveal much more about the city than its winding streets and historic buildings. London's streets, built up over more than two thousand years, are a maze of history, cultures, and stories. In his fantastically detailed maps of the city, Stephen Walter translates these elements into a tangle of insightful yet humorous words and symbols that make up a complex of hidden meanings and wider contradictions. Testament to Walter's skill and importance as a cartographer, his groundbreaking, oversized map The Island was one of only two contemporary works to feature in the seminal Magnificent Maps exhibition held at the British Library in 2010, the other by Grayson Perry, alongside hugely important historical maps, such as Pierre Desceliers's 1550 world map. The work, which reimagines London as an insular body of land surrounded by water, has been reconfigured and turned into Walter's own version of a London street atlas, with readers able to explore his unique vision of the city by flicking through the pages. A grid at the front of the book lets readers navigate their way through the map and the large-scale reproductions allow for close examination of his witty depictions. Walter's maps have a cult following and now a wider audience will be able to immerse themselves in his personal vision that both celebrates the art of cartography and pokes intelligent fun at the city he calls home.

"The features Walter selects are by turns funny, crass, touching, burlesque, murderous and uncanny...And that is the joy of the book, which is as much a guide to history and folklore as it is to the geography of the city." -The Guardian "With a scrupulous attention to detail, Stephen Walter has mapped the City and 32 boroughs in dozens of pencil drawings annotated with illuminating, witty, and sometimes crass commentary, both written and illustrated. His words and symbols reveal not just the physical locale of neighborhoods, but often their social, economic, and political personalities. Rich and imaginative, The Island is a reminder that maps, whether unique cartographic images or mass-produced atlases, are never neutral, always highlighting certain features while keeping others in the dark." -The Boston Globe

Walter, Stephen Stephen Walter's work is an investigation into obsessive drawing, semiotics and the phenomenon of place. Each work is an intricate world in itself; a tangle of words and symbols that make up a complex of hidden meanings and wider contradictions. Through mainly drawing, photography and printmaking, his artworks explore the meaning of objects, the glory of maps, our place in the world both as individuals and societies and touch on the potential legacy that we bequeath to future generations. He holds an MA in Fine Art Printmaking from the Royal College of Art, has exhibited work around the world, and his pieces are in the collections of the Victoria & Albert Museum, The British Museum and The British Library amongst others.