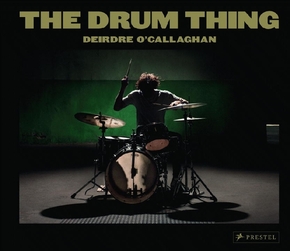 The drummer is usually the least well-known member of any band. Yet behind every frontman is the person keeping the beat, and often acting as the music's driving force. In these incredible portraits, Deirdre O'Callaghan places drummers squarely in the spotlight. Photographing her subjects in their private rehearsal spaces and residences - from studios, bedrooms and basements to garages and gardens - allows her to capture the true essence of their personalities and lifestyles. She has photographed almost 100 celebrated musicians for the book, including Tony Allen, Ginger Baker, Travis Barker, Cindy Blackman, Patrick Carney, Terri Lyne Carrington, Chris Dave, Jack DeJohnette, Bryan Devendorf, Sly Dunbar, Steve Gadd, James Gadson, Dave Grohl, Mark Guiliana, Steve Jordan, Jim Keltner, Airto Moreira, Larry Mullen Jr, Neil Peart, Questlove, Jim Sclavunos, Ringo Starr, Lars Ulrich, Joey Waronker and Jack White. Each image is accompanied by excerpts from O'Callaghan's personal conversations with the drummers. The result is a fascinating look at a truly diverse world made up of men and women from every walk of life, united by a single, emphatic passion.

"In Deirdre O'Callaghan's book The Drum Thing , drummers are front and center. Featuring portraits of and interviews with nearly 100 percussionists working across the musical spectrum, from rock to jazz to hip-hop, the book is a who's who of the men and women who keep the beat." -The New York Times "Each image in The Drum Thing is unique. Whether it's Ringo Starr, Dave Grohl or Clem Burke tearing away with their sticks, Travis Barker looking warily into the camera, a smartened-up Larry Mullen Jr., a focused Stewart Copeland, the iconic profile of Questlove, or Leroy "Horsemouth" Wallace deep in concentration on his kit outdoors, each subject occupies his or her own space in The Drum Thing thanks to O'Callaghan's distinct aesthetic, a contrasting combination of raw and crisp that captures the essence of each one." -LA Weekly "The beat goes on in writer-photographer Deirdre O'Callaghan's ultra-cool The Drum Thing by, which salutes a pantheon of professional percussionists." -Parade "[I]t's a beautiful and honorable thing that O'Callaghan does with The Drum Thing , shining a light on the faces that deserve to be known and seen. And the stories they share are mindboggling...With every page, O'Callaghan surprises us with the unexpected stories of the men and women behind the music." -Crave "Drummers are notoriously the most overlooked members of the band. Musicians know, however, that drumming is the essential backbone of great music. That is why Irish photographer Deirdre O Callaghan chose drummers as the subject of her latest book, The Drum Thing ... [Dedication and physicality] are on full display in the muscular images, most of which were taken in private homes or studios. That provides viewers with a rare look at both personal style and the rhythm of daily life." -Jessica Gelt, Los Angeles Times

Deirdre O'Callaghan has published numerous books of photography, including Hide That Can , which was awarded Book of the Year by both the International Center of Photography in New York and the Rencontres de la Photographie in Arles. One of the original team at Dazed and Confused magazine, O'Callaghan has shot artwork and press for major record labels as well as stars such as U2, The National, Peaches, De La Soul, and Disclosure.