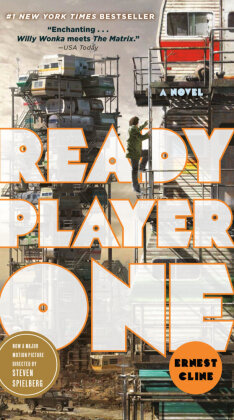 In the year 2045, reality is an ugly place. The only time teenage Wade Watts really feels alive is when he's jacked into the virtual utopia known as the OASIS. Wade's devoted his life to studying the puzzles hidden within this world's digital confines-puzzles that are based on their creator's obsession with the pop culture of decades past and that promise massive power and fortune to whoever can unlock them.
But when Wade stumbles upon the first clue, he finds himself beset by players willing to kill to take this ultimate prize. The race is on, and if Wade's going to survive, he'll have to win-and confront the real world he's always been so desperate to escape.

I was jolted awake by the sound of gunfire in one of the neighboring stacks. The shots were followed by a few minutes of muffled shouting and screaming, then silence.

Gunfire wasn't uncommon in the stacks, but it still shook me up. I knew I probably wouldn't be able to fall back asleep, so I decided to kill the remaining hours until dawn by brushing up on a few coin-op classics. Galaga, Defender, Asteroids. These games were outdated digital dinosaurs that had become museum pieces long before I was born. But I was a gunter, so I didn't think of them as quaint low-res antiques. To me, they were hallowed artifacts. Pillars of the pantheon. When I played the classics, I did so with a determined sort of reverence.

I was curled up in an old sleeping bag in the corner of the trailer's tiny laundry room, wedged into the gap between the wall and the dryer. I wasn't welcome in my aunt's room across the hall, which was fine by me. I preferred to crash in the laundry room anyway. It was warm, it afforded me a limited amount of privacy, and the wireless reception wasn't too bad. And, as an added bonus, the room smelled like liquid detergent and fabric softener. The rest of the trailer reeked of cat piss and abject poverty.

Most of the time I slept in my hideout. But the temperature had dropped below zero the past few nights, and as much as I hated staying at my aunt's place, it still beat freezing to death.

A total of fifteen people lived in my aunt's trailer. She slept in the smallest of its three bedrooms. The Depperts lived in the bedroom adjacent to her, and the Millers occupied the large master bedroom at the end of the hall. There were six of them, and they paid the largest share of the rent. Our trailer wasn't as crowded as some of the other units in the stacks. It was a double-wide. Plenty of room for everybody.

I pulled out my laptop and powered it on. It was a bulky, heavy beast, almost ten years old. I'd found it in a Dumpster behind the abandoned strip mall across the highway. I'd been able to coax it back to life by replacing its system memory and reloading the stone-age operating system. The processor was slower than a sloth by current standards, but it was fine for my needs. The laptop served as my portable research library, video arcade, and home theater system. Its hard drive was filled with old books, movies, TV show episodes, song files, and nearly every videogame made in the twentieth century.

I booted up my emulator and selected Robotron: 2084, one of my all-time favorite games. I'd always loved its frenetic pace and brutal simplicity. Robotron was all about instinct and reflexes. Playing old videogames never failed to clear my mind and set me at ease. If I was feeling depressed or frustrated about my lot in life, all I had to do was tap the Player One button, and my worries would instantly slip away as my mind focused itself on the relentless pixelated onslaught on the screen in front of me. There, inside the game's two-dimensional universe, life was simple: It's just you against the machine. Move with your left hand, shoot with your right, and try to stay alive as long as possible.

I spent a few hours blasting through wave after wave of Brains, Spheroids, Quarks, and Hulks in my unending battle to Save the Last Human Family! But eventually my fingers started to cramp up and I began to lose my rhythm. When that happened at this level, things deteriorated quickly. I burned through all of my extra lives in a matter of minutes, and my two least-favorite words appeared on the screen: game over.

I shut down the emulator and began to browse through my video files. Over the past five years, I'd downloaded every single movie, TV show, and cartoon mentioned in Anorak's Almanac. I still hadn't watched all of them yet, of course. That would probably take decades.

I selected an episode of Family Ties, an '80s sitcom about a middle-class family living in ce