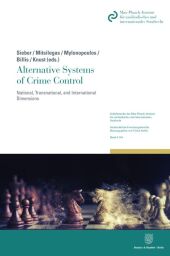 The typical trial-oriented systems of criminal justice that are primarily based on the strict application of substantive criminal law have reached their functional and logistical limits in most parts of the modern legal world. As a result, new sanction models, less formal, administrative, and discretionary case disposals, plea bargaining arrangements, and other alternative procedural and transitional justice mechanisms have emerged at unprecedented levels in national and international legal orders affiliated both with the civil law and the common law tradition. These normative constructs and practices aim at abbreviating, simplifying, or circumventing the conventional criminal investigation and prosecution. They seek to enhance the effectiveness of conflict resolution proceedings and to shift the focus of crime control from repression to prevention. The present volume explores these alternative, informal, preventive, and transitional types of criminal justice and the legitimacy of new sanction models in the global risk society from the perspective of national and international justice and by focusing on the special regimes of anti-terrorism measures and security law. The authors of the papers are experts and internationally acclaimed scholars in this field. Their research results were presented and discussed at an international conference held on 26-27 January 2018 at Middle Temple in London, UK, which was organized by the School of Law of the Queen Mary University of London, the Max Planck Institute for Foreign and International Criminal Law (Freiburg), and the European & International Criminal Law Institute (Athens).

Foreword Part 1: Paradigm Shift Ulrich Sieber The New Architecture of Security Law - Crime Control in the Global Risk Society Part 2: National Justice Systems Emmanouil Billis and Nandor Knust Alternative Types of Procedure and the Formal Limits of National Criminal Justice: Aspects of Social Legitimacy Chrisje Brants Prosecutorial Sanctions in the Netherlands Thierry Delpeuch and Jacqueline Ross Crime-Fighting and Prevention as Competing Approaches to Collective Juvenile Violence - A Comparative Study of the United States and France Christos Mylonopoulos Bargain Practices and the Fundamental Values of the ECHR Part 3: International Justice Systems Philipp Ambach Reparation Proceedings at the International Criminal Court - A Means to Repair or Recipe for Disappointment? James Stewart The Imposition of Penal Sanctions at the Level of the International Criminal Court and Its Relationship to Other Forms of Justice Delivery John Vervaele Transitional Criminal Justice in Colombia and Complementarity Policy under the Rome Statute of the International Criminal Court Part 4: Special Regimes: Anti-Terrorism Measures and Security Law Lorena Bachmaier Countering Terrorism: Suspects without Suspicion and (Pre-)Suspects under Surveillance Florian Jeßberger and Nils Andrzejewski 'It Is Not a Crime to Be on the List, but ...' - Targeted Sanctions and the Criminal Law Valsamis Mitsilegas 'Security Law' and Preventive Justice in the Legal Architecture of the European Union Stephen Thaman The US Foreign Intelligence Surveillance Act and the Erosion of Privacy Protection Nikolaos Theodorakis Legitimacy, Effectiveness, and Alternative Nature of Sanctioning Procedures in the UN Sanctions Committees and within the EU Common Foreign and Security Policy Niovi Vavoula Prevention, Surveillance, and the Transformation of Citizenship in the 'Security Union': The Case of Foreign Terrorist Fighters Editors and Authors