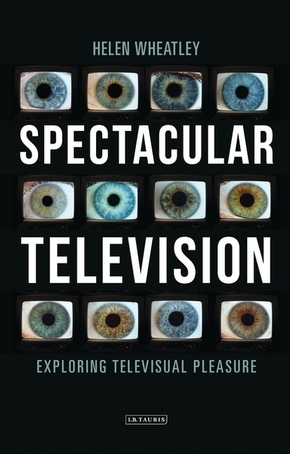 Helen Wheatley answers the questions: what is televisual pleasure, and how has television defined its own brand of spectacular aesthetics?

In terms of visual impact, television has often been regarded as inferior to cinema. It has been characterised as sound-led and consumed by a distracted audience. Today, it is tempting to see the rise of HD television as ushering in a new era of spectacular television. Yet since its earliest days, the medium has been epitomised by spectacle and offered its viewers diverse forms of visual pleasure. Looking at the early promotion of television and the launch of colour broadcasting, Spectacular Television traces a history of television as spectacular attraction, from its launch to the contemporary age of surround sound, digital effects and HD screens. In focusing on the spectacle of nature, landscape, and even our own bodies on television via explorations of popular television dramas, documentary series and factual entertainment, and ambitious natural history television, Helen Wheatley answers the questions: what is televisual pleasure, and how has television defined its own brand of spectacular aesthetics?

Introduction: What is spectacular television? What is (tele)visual pleasure?
Part I Spectacular Histories, Spectacular Technologies

Chapter 1: Television comes to town: The spectacle of television at the mid-twentieth-century exhibition and beyond

Chapter 7: The erotics of television

An eminently readable book with strong examples that support its fundamental argument that visual pleasure is intrinsic to television aesthetics and practice ... Wheatley [provides] comprehensive research and articulate analysis. Journal of Cinema and Media Studies