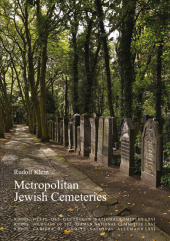 -60%1
Into the Wind
Produktbeschreibung

This is the first comprehensive work on metropolitan Jewish cemeteries in Central and Eastern Europe on an international level. Based on a comparative analysis of numerous examples, from the Baltic to the Balkans, and from Russia to Germany, it touches upon art history, architecture and planning, landscaping, Jewish studies, and on general and modern Jewish history. An important aspect of this work is the cultural background of Jewish funerary art: Christian-Jewish dialogue, the inter-Jewish influence between different European regions, including the impact of the Reform Movement that started in Germany and spread across the whole continent, and the Ashkenazi-Sephardi dialogue in some parts of the old continent. It is also the first work which touches upon the entirety of issues related to Jewish burial places of the 19th and 20th centuries: urban level, morphology of cemeteries, gavestone typology, stylistic analysis, symbols and inscriptions - language, content, typography - tahara and ceremonial halls, wells, benches, pergolas, row-and section-markers and gravel holders. The book presents cemeteries that have survived until today in their substantial parts, as well as slightly or markedly ruined cemeteries representing a special value in artistic, landscaping or historic aspects, or from the point of view of memorising strategies of the lost Jewish population and its tangible heritage. This book is intended for a wide variety of readers: municipal decision makers, urban planners, architects and restorers, cemetery management and maintenance, art historians, scholars of Jewish studies, and the wider public interested in Jewish heritage and funerary culture of the 19th and 20th centuries.