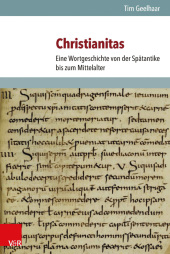 The word "christianitas" arose as an abbreviation for the medieval idea of united Christendom, which entered the historical narratives concerning Christianity, the Papacy and emperorship, the crusades and Europe. In fact, in late Antiquity and the Carolingian period "christianitas" stood for many different concepts. In this volume Tim Geelhaar disconnects the term and the idea behind it and determines the situations in which it came to be used, how it was reprogrammed and politicized. He demonstrates the historical semantics behind "christianitas" as well as the plurality of Christianized, Latinized Europe.

The word 'christianitas' found its way into historical accounts of Christianity, papacy and imperial rule, crusades and Europe as a cipher for the medieval idea of Christianity. In fact, however, in late antiquity and in the Carolingian period, 'christianitas' stood for various notional concepts. Tim Geelhaar uncouples the term and the idea and explores the usages, resemanticizations and politicizations of the word. The historical semantic of 'christianitas', as he clearly illustrates, makes the plurality of a Christian, Latin Europe visible.